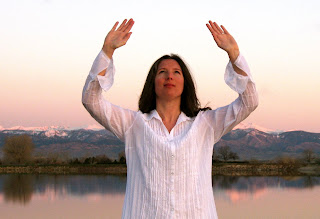 “Qigong” translates to “cultivating life force”, in other words, tending to, nurturing and gathering the energy in which all living things in this world are made of. Energy is the most fundamental level of our physical, and some say spiritual, being. Scientists are discovering what qigong masters have known for thousands of years; we are energetic beings living in an energetic universe. Everything is connected by this thread of light that is vast, infinite and indestructible, and it emerges out of what the masters refer to as “Wuji”, the great nothingness, or the void.

Qigong Healing is now making it’s way into the mainstream healing field, as it is becoming recognized as a very valuable form of alternative medicine. Qigong, the term which includes qigong healing and the practices of qigong, offers the ability for each of us to be more conscious in our own healing, and in that, is very self- empowering. It has not been well known in our culture until recently, although it is one of the most ancient healing modalities on our planet. It originated in China over 3,000 years ago and has slowly surfaced in most countries throughout the world today. There is a reason for this expansion in our modern reality. Something so old, and yet so relevant to our world today must have a valuable place in our lives.

Qigong masters used the knowledge of energy for purposes of spiritual development, as well as for health and well being. As a powerful tool to create meaningful and fulfilling lives, qigong has withstood the test of time and has continued to expand throughout the planet. We now can find a qigong or tai chi class, which is form of qigong, at our local recreation centers or in our communities. How amazing to be living in this time of openness of ancient practices that were hidden from common people for many years. It was traditionally a privilege to be taught a qigong form and one that was only given to very select people. Now, in this age of information and connectivity, qigong, and other forms of healing are being openly shared with anyone interested. Some of the sacredness and value may have been lost through this transition, as we may take it for granted, yet anyone that uses a healing form knows the sacredness is very much alive within it.

Qigong practices are taught to people in class form as a way for them to take control of their own energy system and health. Some forms are practiced simply by sitting and engaging the mind and breath to move the energy within, and others are practiced by moving the body, which adds the benefit of engaging the physical body. Qigong forms are often simple and can be learned in a short amount of time, which allows the practitioner to take the form home and practice it daily. Tai Chi, and other modalities such as martial arts, are made up of a series of forms that require a longer series of classes to learn. There is now an International Tai Chi/ Qigong Day, held annually in April, which is an excellent opportunity to try qigong or tai chi for the first time, or to find like-minded people in your community to practice with. For more information regarding this event, please visit www.worldtaichiday.org.

An additional branch of Qigong, the one in which I specialize in, is Qigong Healing, often called “Medical Qigong”. It is a form of healing in which the recipient receives life force from a qigong healer. The qigong healer has been trained not only to cultivate energy for their own wellness, but also knows how to work with life force in relation to another being’s energy. Most often, the recipient is sitting or laying on a massage table, in a receptive state, and allowing the healer to work on their system. The recipient may engage in the process through feedback or communication, yet the healing is happening without their need to “do”, much like receiving a massage or other form of bodywork. A qigong healer knows that the healing is actually done by the combination of the life force, their willingness and ability to focus and listen in order to allow the qi to flow, and the recipient; it is a group effort. The recipient is engaging on a more subtle level, much like one would engage in a meditation. The consciousness of the person is engaged, yet not necessarily with the person’s full awareness of that. The more the recipient is simply open and willing for the life force to do it’s work, the more effective the healing will be.

Just as there are thousands of qigong forms, there are also many different forms of qigong healing. Some healers focus solely on the meridians, or lessening localized pain or healing imbalances in the internal organs, etc. There are many schools that teach qigong healing, and I can imagine that a student would learn different forms at each school. The forms are all valuable and effective, and hold the common goal of bringing the person back to their natural state of wholeness.

Because there are so many forms of qigong healing, I would now like to continue this topic by explaining the specific techniques that I use during a qigong healing session. Because of the depth involved in each technique, I will begin a new post for this sole purpose. Please visit the entry entitled “Returning to God’s Perfection” to continue.

This entry was posted in River Of Qi and tagged Meditation, Practice, Qigong. Bookmark the permalink.